For an analysis of the NCCUSL process, a discussion of possible vulnerabilities of that process to special interest groups (critique discussing Public Choice Theory and the vulnerabilities of the NCCUSL process to such influences), the strengths of the process, and why the process works, please see - Andrew C. Spiropoulos, The Uniform Law Process: Observations of a Detached Participant, 27 Okla. City U. L. Rev. 585 (2002).

Example of the Uniform Laws; The Uniform Commercial Code

THE UNIFORM LAW COMMISSION (ULC) - also known as the National Conference of Commissioners on Uniform State Laws (NCCUSL): The ULC strives for the improvement of state laws by drafting uniform and model laws on various subjects. While the differences between uniform laws and model acts will be addressed in the box below, one of the ULC's main goals is for the adoption of uniform laws - on certain subjects - so that those laws will, ideally, apply uniformly across the United States. The ULC seeks this uniformity where it would benefit the interests of U.S. citizens across the country, i,e., serve the common good. For example, the Uniform Commercial Code benefits people and businesses dealing in commercial transactions that involve more than one state - allowing for the law covering all parts of the transaction, regardless of State, to apply uniformly. However, for the view that the ULC, aka NCCUSL, should avoid areas of public policy see Andrew C. Spiropoulos, The Uniform Law Process: Observations of a Detached Participant, 27 Okla. City U. L. Rev. 585 (2002).

The ULC is a non-profit association created by state governments, and designed to investigate what areas of law would benefit from multi-state uniformity. The ULC then researches how best to achieve this uniformity and proposes uniform acts to the States for adoption. The ULC is made up of commissioners from each State and many of the U.S. territories. The ULC has, in its one hundred twenty (120) year existence, been responsible for the more than three hundred (300) uniform acts.

"The National Conference has drafted some model acts, but many model acts, including the Model Penal Code (KF9209.5 .A156 1985), are developed by the American Law Institute (ALI). ALI, an organization comprised of prominent judges, law professors, and attorneys, was established in 1923 to 'promote the clarification and simplification of the law and its better adaptation to social needs, to secure better administration of justice and to encourage and carry out scholarly and scientific work'."  Darla Jackson, Uniform Laws and Model Acts (2005). For a list of the ALI's Model Acts and Uniform Laws check out their website. The ALI's list of Model Acts includes: A Model Code of Pre-Arraignment Procedure, Model Penal Code, Model Penal Code: Sentencing, Model of of Evidence, and A Model Land Development Code. The ALI's Uniform Laws include the Uniform Commercial Code.

"The American Bar Association (ABA) has also been responsible for drafting several model acts and uniform laws. For example the Model Business Corporation Act was prepared by the ABA's Business Law Section and the Model Code of Judicial Conduct was prepared by the ABA Standing Committee on Ethics and Professional Responsibility." Darla Jackson, Uniform Laws and Model Acts (2005)

Uniform Acts versus Model Acts; What is the Difference?

"The difference between the two forms of draft legislation is subtle. The primary difference involves the extent to which state legislatures are expected to modify the proposed drafts before adoption. Although it is the prerogative of each state's legislature to adopt a particular law in full or to adopt and modify it, state legislatures are encouraged to adopt uniform acts exactly as written to promote uniformity among the states. The NCCUSL designates an act as a uniform act or law 'when it has a reasonable possibility of ultimate enactment in a substantial number of jurisdictions.' In contrast, model acts are intended as guidelines which states may adapt to best address unique circumstances. 'The expectation of the drafters is that parts, but not necessarily all of the act, will be adopted or modifies and then adopted by various states."

Example of a Uniform Law - The UCC 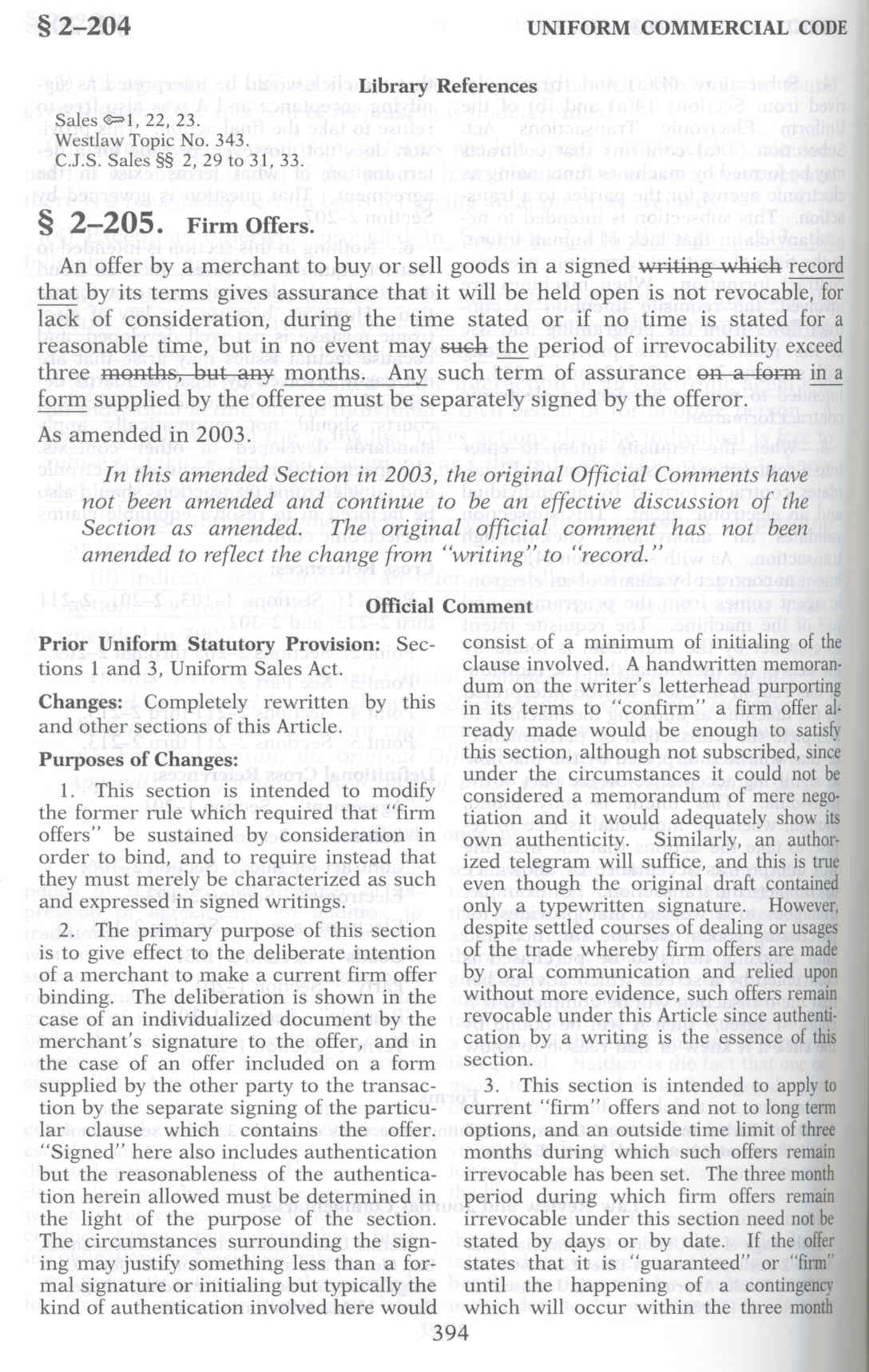