It may be important or at least a point of interest for a researcher to determine the relative amounts of money cases are being argued over. Sometimes the sums are very large and other times they are quite trivial. The table below gives the Mark (not a coin but a unit of measure for accounting) then its relative value in shillings (s) and pence (d) and pound (£). If you need some help figuring out relative values remember that twelve (12) pence equals one (1) shilling and twenty (20) shillings equals one (1) pound.

To Translate old English currency values into modern values with an easy to use calculator check out this site.

Modern currency values are highly inflated compared to currency values in the year 1270. Below is an example showing modern values to old English currency around the year 1270 (decimal points rounded up). These values were calculated using RPI, a value calculator that bases its values on the buying power of a currency value over the years. For example (completely hypothetical and overly simplified), if $1 could purchase a moon rock in 1980 but by 1990 it would cost $2, the purchasing power of the $ decreased by half / inflated by double.

The Rulers of England - Kings and Queens 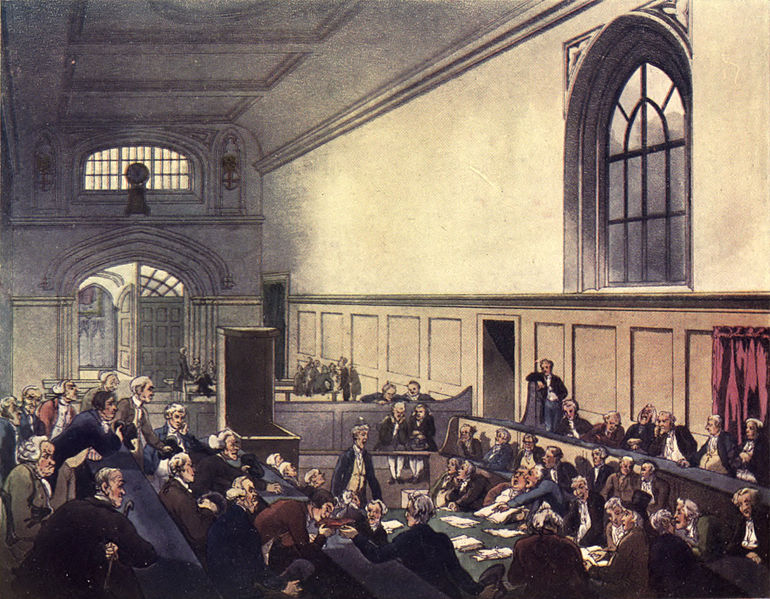 The King's Bench (or Queen's Bench during the reign of a Queen) was originally founded in 1215 as one of the Highest Courts in England, being co-equal with the Court of Common Pleas, but hearing - in theory - different cases. Originally the court accompanied the King where ever he traveled and heard matters relating to royal issues. Eventually the court was permanently placed at Westminster. Today, the court is one of the divisions within the High Court of Justice in England and Wales.

Below is a short list of some of the more common legal terms found in early English cases that most modern U.S. law students are likely unfamiliar with.

Law French - Law French is a type of special language used in early English courts in a way akin to today's courts use of Latin. Early English courts used their native English, Law French, and Latin. Thus, it is important to be able to distinguish when Law French is used and what it means. Law French derives from the form of French used by the Normans. It was then influenced by developing popular Parisian French and English. The resulting hodgepodge became a standard in English courts after the Norman Conquest. It continued to be used - though more sparingly - for centuries. Some Law French survives to this day: attorney, plaintiff, defendant, bailiff, parole, chattel, estop, culprit, escheat, etc.... For a guide on the use of Law French see Manual of Law French by Professor Sir John H. Baker.

Assize - In early English law, a session or proceeding of court, a judicially supervised inquest conducted by a jury into the factual matter of a case.

Assize to be taken - A jury will decide the issue

Proof by Body - A judicially supervised battle between parties, the victor of the battle being declared the victor of the case. Each party generally would have sworn an oath before God, each asking God to give victory to the rightful party. The courts believed God would decide the battle and thus decide the case. Only a defendant could request Proof by Body. It became common for each party to hire warriors to fight in their place. Only allowed in certain types of cases.

Wager of Law - A type of "proof" a defendant could offer to prove his defense. Essentially, if the defendant could present twelve (12) men to pledge to the defendant's side of the story, under oath to God, then the defendant automatically won. This type of defense was most powerful in the 1200's but began fade in later centuries. Restricted to certain types of cases.

Traverse/Traversable - A party to the action is allowed to deny an allegation of fact.

Non-Traversable - Means a party is not allowed to deny an allegation of fact (today we are not familiar with the concept that a party is not even allowed to try and prove or disprove a factual claim but in early English law it was common.

Serjeant - A lawyer at trial representing a client

Writ - In early English law a writ was a formal written order issued under royal authority allowing one party to bring charges/claims against another. The writs began as an oddity necessary for parties to have their dispute heard by the King himself. However, as the legal system became more standardized permanent courts were established to take over this role. Additionally, while the original writs were drafted to specifically match the circumstances of the parties, this to began to change. In the year 1258 the creation of new writs was banned. As a response, those wishing to have their cause heard by the royal courts were forced to fit their claim into one of the existing writs, e.g., Writ of Debt, Writ of Detinue, etc.... Over time the strict ban was eased (see writs for Trespass on the Case).

Trespass (writs) - A wrongful act against a person, property, or other thing. Included: Trespass to land, Trespass to property, Trespass (breach) of the peace, Nuisance, Trespass on the Case (Where the court makes up an individualized writ that applies only to the particular case). A latin term that may be used is "Trespass vi et armis," which means "Trespass with force and arms." Trespass with force and arms was used to classify tort actions where the "force" lead directly to injury. The other common trespass action is "on the case." The on the case type of trespass was also a tort action but where the act of the defendant indirectly lead to the injury, i.e., negligence.

Assumpsit (Writs) - A cause of action alleging that a party had assumed a duty or duties pursuant to an agreement, such agreement being either express or implied, and the party breached that duty. A example of this is the Bailment - the Bailor and Bailee relationship. When a party (bailor) leaves property to another party (bailee) for some reason, the bailee assumes certain duties depending on the reason for - thus type of - the bailment. A modern example of a bailment is when a costumer (bailor) leaves clothing with a dry cleaner (bailee). The dry cleaner (bailee) assumes certain duties and responsibilities beyond simply cleaning the clothing. The dry cleaner assumes a certain level of guardianship over the property. By the early 1700's English law recognized six (6) types of bailments, each one with its own types of duties. See Coggs v Barnard, 2 Ld Raym 909 (1703) (where the court discusses the six types of bailments and the writ of assumpsit).

Debt (writ) - The cause of action for the collection of money owed.

Detinue (writ) - The cause of action for the collection/return of property owed.

Account (writ) - Same as debt, but where an “accounting” would be necessary to discover the true amount owed; most often used between merchants.

Many early English cases will refer to events, both factual and procedural, by their relation to certain celebrations. For example, one English judge stated, "If perchance the aforesaid William could reveal anything by reason of which the said castle and manor ought not to be restored to Humphrey, then he is to be on the Octave of Michaelmas before the king himself or before his lieges holding his place in England...." Coram Rege Roll, no. 1 (Michaelmas 1273), m.17d; 55 Selden Society 2 (1936) (emphasis added). We can discern the date of the above quoted "Octave of Michaelmas" using the list below. Michaelmas is September 29 and an Octave means 8 days afterwards. Thus, the date is October 7. From the above you can see how important it is to know these dates.

Ascension Day - 40 days after Easter (May or June)

Whitsunday (Pentecost) - 7 weeks after Easter (May or June)