Patents: Process for Obtaining a Patent

Process for obtaining a Utility Patent 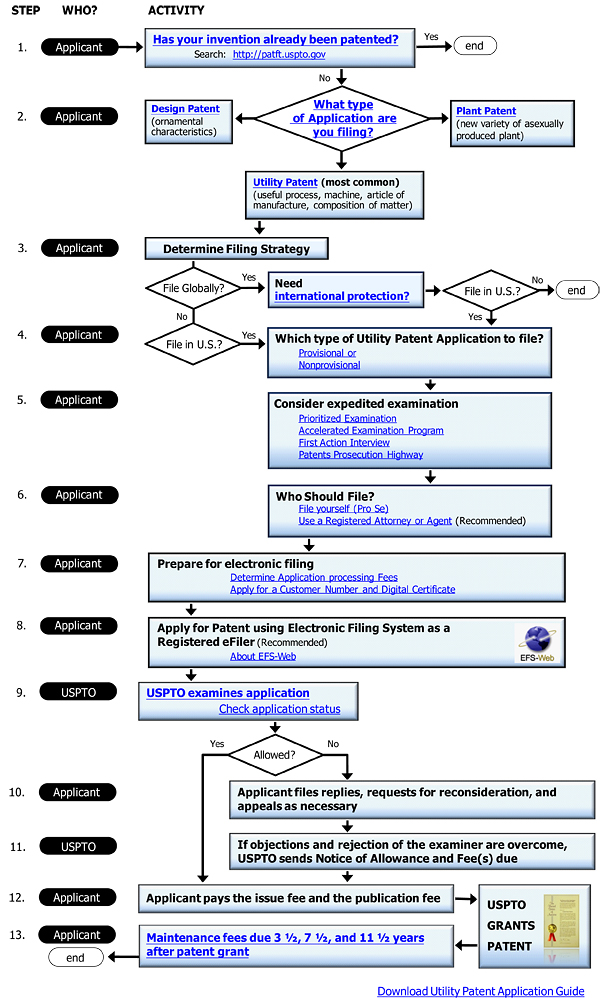 Here is a video, USPTO: Inventor's Greatest Resource, that gives guidance and encouragement to anyone who is seeking to patent their invention.

Be sure to invent something before you apply for a patent. Though this sounds like a silly thing to say, remember that to obtain a patent you need more than an idea: you need a useful, novel, and non-obvious invention that works.

To receive a patent, your invention must meet the following three criteria:

If you invent a new, original, and ornamental design for an article or manufacture you may receive a design patent.

Plant patents work a bit differently. Since the language for plant patents is both very precise and very technical, we quote from the U.S. Patent and Trademark Office (USPTO) itself:

"Plant patents are granted to any person who has invented or discovered and asexually reproduced any distinct and new variety of plant, including cultivated sports, mutants, hybrids, and newly found seedlings, other than tuber-propogated plant or a plant found in an uncultivated state."

The invention has a useful purpose

The invention will operate to perform that useful purpose—that is, it works.

Your patent must, of course, be novel (new). That is, if the invention has been known of or described in a printed publication somewhere (the U.S., Iceland, Madagascar. . .) before you invented it, or if it has been patented or described more than one year prior to your patent application, you can't get a patent. So if you invent something, begin to market it, and apply for a patent more than a year after you've made your invention public, you've prevented yourself from getting a patent.

Once you have invented something useful and non-obvious (and even before that, probably) you should search existing patents as thoroughly as you can to see whether your invention is indeed novel. You can search for patents yourself at a Depository Library, or have someone else (like a patent attorney ) do it for you.

The invention has not been disclosed (made public) before (in the United States, there is a one-year grace period following public disclosure)

A further stipulation of novelty refers to obviousness. Even if what you want to patent is not exactly described in published information, and even if you have created something with one or more differences from the most nearly similar thing known, the US Patent & Trademark Office might still refuse your claims if it thinks those differences obvious. For instance, changes in materials ("But nobody has ever made an internal combustion engine out of pork sausage before?!") or changes in size ("But this toothpick is REALLY BIG?!") don't usually count for much.