A reporter is a publication of case law from a specific jurisdiction. For a list of the different types of reporters, consult table T1.1, T1.2, and T1.3 in your Bluebook. 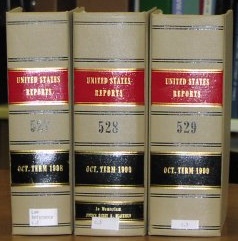 Until 1954, Oklahoma had its own official reporter called the Oklahoma Reports. During this time period, Oklahoma case law was published in both the Pacific Reporter and the Oklahoma Reports. Effective January 1, 2014, the Oklahoma Supreme Court is the official publisher of its own cases and cases from the Oklahoma Court of Civil Appeals. Official versions are on the Oklahoma State Courts Network (OSCN) at www.oscn.net and must be cited in proper public domain citation format. However, a parallel citation to the Pacific Reporter is required. Pinpoint citations to official versions are by paragraph number, not page number. For additional information on citing to Oklahoma cases, see Oklahoma Supreme Court Rule 1.200 and Oklahoma Court of Criminal Appeals Rule 3.5(c).